A look at designing and delivering presentations, in person and online.
[Open all concertina sections]

Having chosen our tool, it's time to consider some basics: First we take a look at five golden rules of effective slide design, and then have a go at implementing those principles using the full-screen image method. Then we take a look at the importance of placeholders and how slide layouts can be controlled using masters and themes.

Presentation materials should aim to be clean, consistent, and supportive of what you're trying to say. Avoid anything that distracts from your message. If animations, transitions or templates are just for the sake of it, they will get in the way of your story, so use them wisely and with caution.

Bullet point lists have their uses (not least on a website like this) but in a presentation slide:

It's true that a bullet list provides a potentially useful summary of what's being said, but it's not always the most helpful approach. Research shows that graphical representations are more helpful to learning (and better received) than bullet point lists.

3: One point per slide

Rather than a list of potentially distracting points, try to keep to one point per slide (or at the very least reveal each point as it becomes relevant). Give what you're saying room to breathe.

Use whole sentences rather than fragments, although you can always use things like colour (contrast permitting), weight, or font-size to emphasise key points.

There are four main font categories:

Serif fonts, with their traditional, formal overtones, are often used in print. They're typically avoided in online contexts because display resolutions have historically not really been up to displaying them with sufficient clarity to be properly accessible.

Sans-serif fonts like the ones we usually use on these pages are considered more modern and less formal, and their relative simplicity means that they display better in digital media (like a web page or a PowerPoint slide). You should generally favour fonts like these in your slides.

Cursive fonts mimic handwriting. Some look like wedding invitations and aren't very readable at all. Some, like Comic Sans, are designed to be accessible for children, but that carries negative connotations in other uses.

Then there's decorative fonts. Informal; fun; good for accents. But you wouldn't want a whole presentation like this.

In terms of font selection, University-managed computers have a broad range of fonts. If you're on your own computer and want a better variety of fonts, there are a number of free fonts available online. We got the fancy font above ("Audiowide") from Google Fonts, and there's also Font Squirrel. As always, use caution if downloading fonts from unfamiliar sites.

As any optician's chart will demonstrate, size of font is important.This is 24pt and you probably wouldn't want to go much smaller than that on a slide (though it depends on where you're presenting and the size of the screen) — if you're struggling to fit things on at that size, maybe you're trying to squeeze too much into one slide? 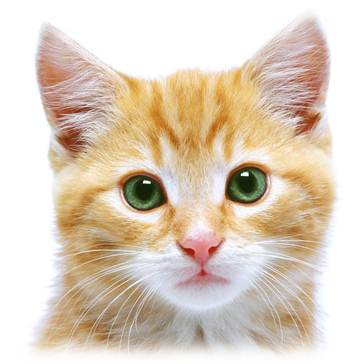 According to research by Dr Richard Mayer (on whose principles these rules are based), learning improves when words are placed near relevant pictures. The key word there is relevant. Relevant images help people learn.

Take a look at our Practical Guide to Copyright for information on sourcing images that you can legally use in your presentations.

“Death by PowerPoint is a phenomenon caused by the poor use of presentation software. Key contributors...include confusing graphics, slides with too much text and presenters whose idea of a good presentation is to read 40 slides out loud.”

We'll get onto the detailed mechanics of slide making in a bit, but first let's have a go at a quick but attractive approach to slide design: the full-screen image method:

The image you use should reflect the point you're making.

This approach, based on the 'five golden rules', uses a relevant background image overlaid by a short summary sentence. A slide deck using this method may be quite long in terms of the number of slides, but each slide might only be on screen for less than a minute. Slides of this style are relatively easy to put together but make for a distinctive and attractive presentation.

It might be your own image, or it might be something you've found on the internet, in which case you'll need to think about questions of ownership and copyright. Fortunately there are plenty of images out there that you can use for free. Our Practical Guide to Copyright has information on sourcing images that you can legally use in your presentations. We're particularly fond of Pexels and Pixabay which both provide public domain / CC0 images that you don't even need to cite (unless you want to).

Use the image as your slide background

Background images don't include alt-text. If your image contains something important (rather than merely decorative / reinforcing), insert it in its own right rather than as a background (we'll look at these principles in the Images section).

Add some text to your slide

There are a few ways of going about this (we'll look at some more in the Text section), but perhaps the most straightforward and accessible method (especially if you're going to be sharing the slides) is to use a Title/Content layout. 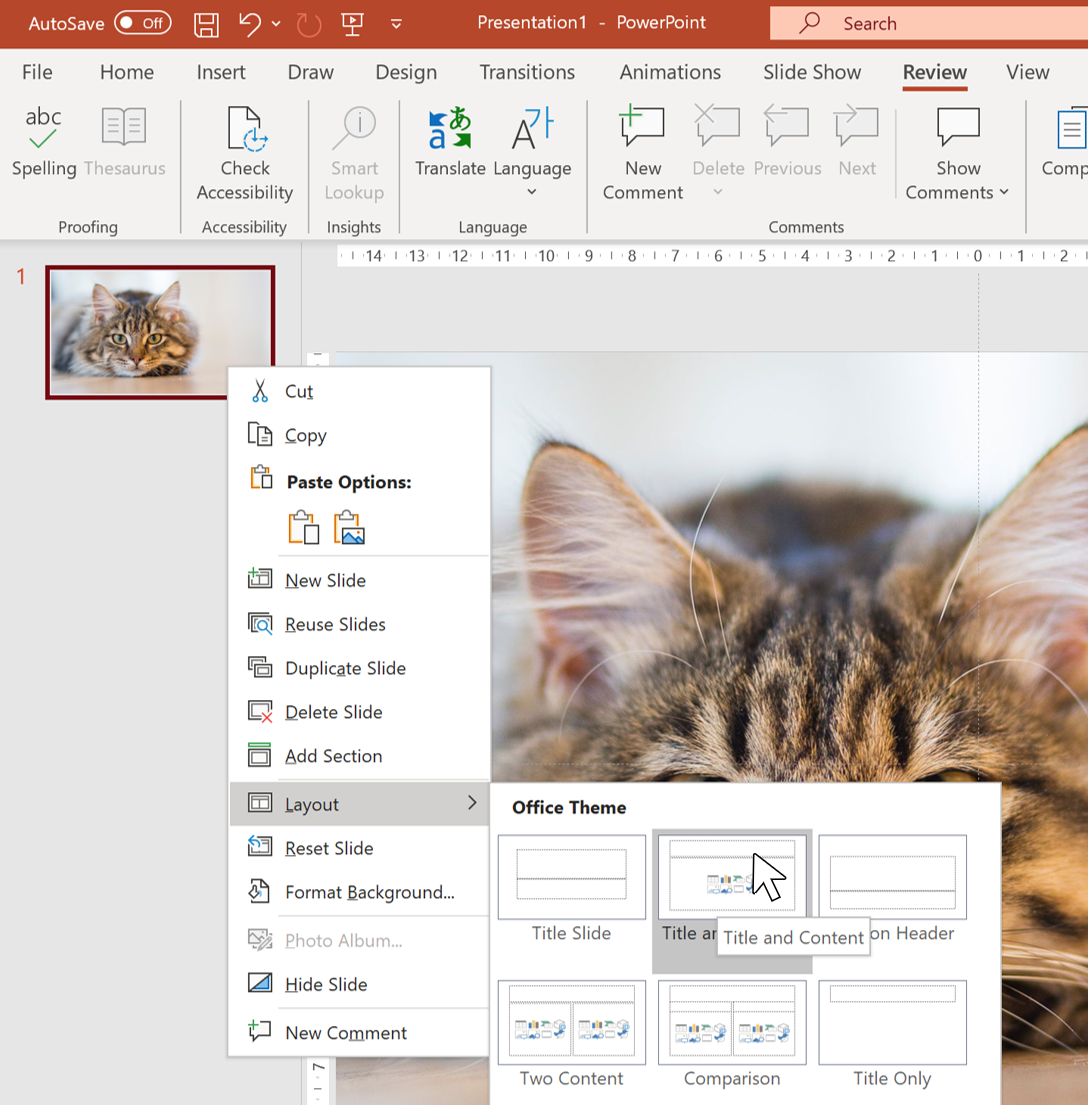 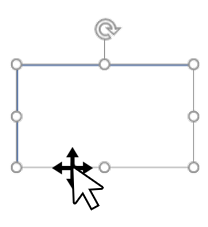 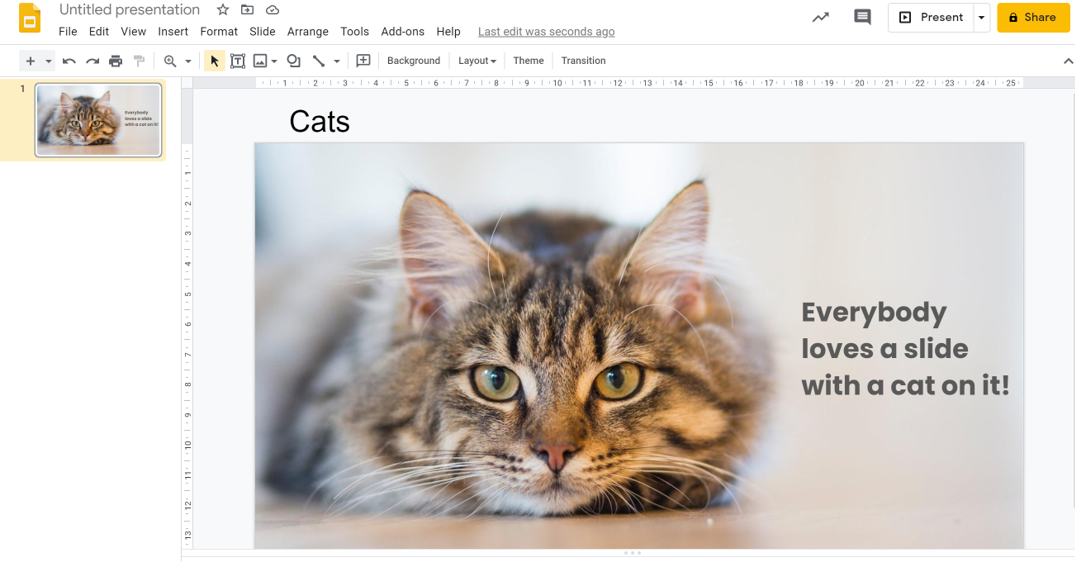 PowerPoint and Google Slides are not strictly designed to be blank canvasses that we fill ad hoc with images and text boxes. This never used to be a problem until we realised how inaccessible our slides were for other people who might have to 'look' at them. In the full-screen image example we deliberately (ab)used a standard title/content layout, and we did so for good reason...

Layouts: what are they and why are you making me use them?!

When you create a new slide, the chances are that your blank slide won't be blank; it will contain a number of placeholders just begging to be filled. The expectation is that you choose an appropriate layout for your slide and use it accordingly.

The first slide in your deck will usually contain Title Slide placeholders, while subsequent slides will generally be created with Title and Content placeholders by default.

The primary functions of these placeholders are to:

It used to be that if you didn't really care about consistent positioning or the ability to globally edit your slides' appearance, then you could happily just ignore these placeholders. But the placeholders are also used to construct a document outline from your slides, making them more accessible and easier to navigate.

Titles are especially valuable in this regard. Take a look at the embedded slides at the top of this box...There's a dropdown on the control panel for those slides (where it says "Slide 1"). If you select that dropdown you'll see that the slide title appears there for each slide in the deck, with the exception of Slide 4, because Slide 4 is the one slide that isn't using a layout with a title placeholder.

Slides 7 and 8 have the same title, which isn't really ideal either, but at least they've got titles, so we can navigate to them safe in the knowledge that we've some idea as to what they're about.

Title text (and even content text) also appears in the 'Outline' view in PowerPoint (View > Presentation Views > Outline View), and PowerPoint's accessibility checker (Review > Accessibility > Check Accessibility) will complain at you if you haven't got titles on your slides (though it will also offer an assortment of solutions to help you out).

You can apply a layout to a new slide, or even swap the layout of an existing slide.

As well as accessing the layouts from the navigation panel (as demonstrated for the full-screen image method), you can change the layout of a slide from:

Any page element using the same placeholders will be adjusted according to the selected layout. Any other modifications to the page will remain unchanged. 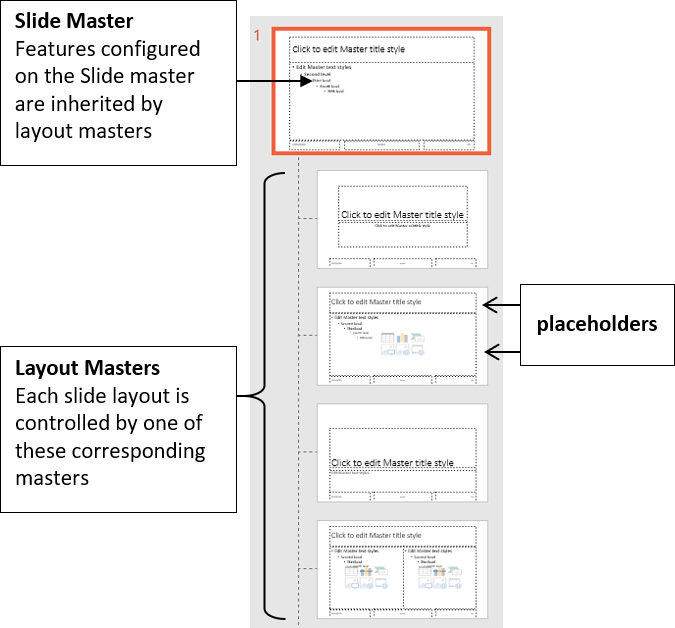 The positioning and formatting of placeholders and other slide content is controlled using a collection of slide and layout masters (effectively a sort of template hierarchy). These masters can be viewed and edited in their own special Master View:

When you view the masters, the layout master for the current slide will be highlighted. Hover over (or select in Google Slides) any layout master to see which slides are using it.


Like the usual view in PowerPoint or Google Slides, the Master View consists of a thumbnail list of masters to the left, and a slide workspace to the right. A slide deck can consist of one or more Slide Masters under which will be a number of Layout Masters. These work according to the following principles: 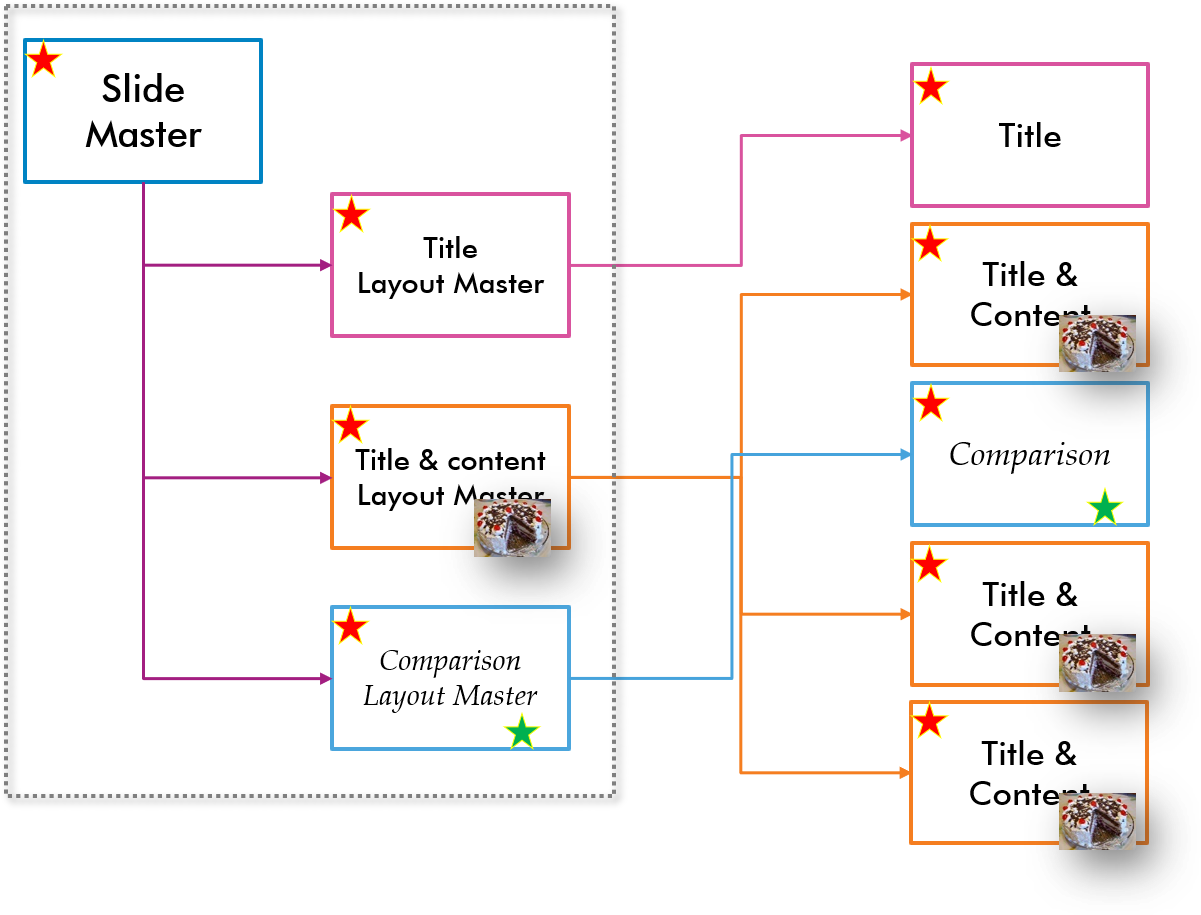 In the above example:

In some cases (particularly in terms of placeholders), changes made at a higher level can be 'undone' or hidden at lower levels.

Here's some specific examples, and how to go about implementing them:

∗ - In Google Slides you would need to create a new Layout Master (see below).

If none of the layout masters meet your requirements, you can modify an existing one or add your own.

From within the Master View...:

Your slide deck can include more than one set of masters (handy if you're stitching multiple presentations together into one deck). You can duplicate an existing Slide Master (and its Layout children) by right-click selecting the master and choosing Duplicate Slide Master. In PowerPoint, further Masters are added to the left-hand navigation pane. In Google Slides, Master View will only display one set of Masters at a time, but you can toggle between them with the toggle selector at the top of the navigation pane.

Getting into the Master View is one thing; getting back out of it again is altogether harder – at least in PowerPoint. Here's the way out:

Go to Slide Master > Close > Close Master View (it's a cross icon but it's easily lost when you've been working in the Master View);

Unselect View > Theme builder, or just hit the little cross in the top right-hand corner of the view.

The Slide Master and most Layout Masters include placeholders for footer information such as slide number (PowerPoint and Google Slides) and date (PowerPoint only). These can be formatted in the same way as other placeholders but will only appear on your slides if the respective features are enabled.

To enable such features:

So can't I make freeform slides?

Many people (the writer of this sentence included) prefer to add their own text boxes to slides, in addition to (or even instead of) the placeholders. There's nothing wrong with doing this, so long as you bear in mind a few things:

More importantly, if you're going to be sharing your slides with others, they're going to need to be accessible, and that means:

A theme is a collection of colours, font styles and graphic elements that give a consistent visual identity to a presentation. Essentially, they're different sets of slide and layout masters.

PowerPoint and Google Slides include a range of built-in themes. They can add a bit of prettiness to your slides, but by their very nature they're a little over-used. You can, however, create and save your own designs.

You can also import a theme from another presentation:

Use the Import theme button at the bottom of the "Themes" side-panel.

Customisation is simply a matter of editing the Slide and Layout Masters to suit your needs. You can then save the modified version for future use:

PowerPoint presentations can also be saved as templates (select "PowerPoint Template" when saving): these serve as an alternative starting point as you can include reusable content (unlike with themes which are just concerned with visual appearance).