A look at designing and delivering presentations, in person and online.
[Open all concertina sections]

Slides don't have to be static. On this page we'll look at how to apply transition effects between slides; we'll explore animations, from making bullet points appear to making objects move and dance in the most elaborate ways; then we'll look at adding audio and video to our slides, including how to record narration and screencasts using PowerPoint.

Transitions are used to make the change between slides less abrupt. They can also serve to give you a bit of breathing space to help punctuate the points you're making.

Some of PowerPoint's transitions can look particularly whizzy, and it's very easy to make your presentation to look like a 1980s pop video. Other transitions may make your audience a bit seasick, You may want to stick to one or two subtle choices!

If you're presenting online, bear in mind that your frame-rate may be quite low, so what looks like a smooth transition on your computer might seem quite jerky and confusing through something like Zoom. You may be better off not using transitions and just having a simple 'cut' between each slide.

The controls for transitions are all found on the Transitions tab:

If you configure a show to use automatic timings but also wish to use it with manual slide advance, you can suppress the timings by unchecking the box at Slide Show > Set Up > Use Timings.

You might want to alternate between, say, two transition effects. You can apply transitions to multiple slides at once by ctrl-selecting (holding down the "Ctrl" button as you click individual slides) in the navigation pane.

Slide animation allows you to introduce, emphasise, and remove items from a slide. This can help focus attention on specific content.

Animation has long been a part of presentation, be it writing on a blackboard, using a piece of paper on an overhead projector to reveal more of a transparency, or, if you're the BBC, this sort of masterpiece of pop-up card:

In slide software, an animation effect can be achieved simply by duplicating an existing slide and then adding or removing content. But there are also built-in animation tools that allow animation of elements to take place within a single slide. The principles involved aren't that different to what Alfred Wurmser was doing in 1957, but in a slide deck it's a bit easier and requires a lot less mechanical skill!

The Animation tab includes the essential controls for animating content.

There are four types of animation effect:

Bullets set to appear one-at-a-time in separate (enumerated) animations.
The animations will play in numerical order.

By default, animations are set to be triggered by a mouse click. All of these defaults can be modified in the Effect Options.

When you apply animation to a series of bullet points, the following defaults apply:

The animation options in Google Slides are relatively basic:

By default, a Fade in animation will be applied to the selection. Regardless of its type, this will act upon the text/object as a whole.

Use the By paragraph checkbox to force the animation to act on each paragraph in turn.

When presenting, an animation is enacted according to its Start condition. This can be one of three options:

With the last two options, if there is no preceding animation, the effect will start automatically when the slide is shown.

PowerPoint also has the option to define an object in your slide as a clickable Trigger for your animation.

In Google Slides, the order in which animations are triggered can be changed using the drag bars in the Object animations section of the "Motion" side panel: just drag and drop the animations in the order you want.

In PowerPoint, you'll need to use the Animation Pane [cue dramatic music, perhaps as an animation event]... 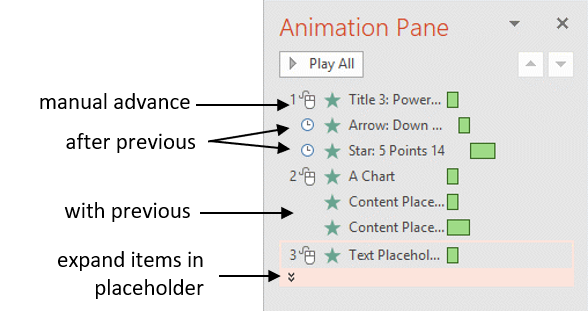 Each animated item is listed in the pane, and icons indicate the timing and type of animation. The numbers in the pane indicate the order in which the animations are played, and correspond to the numbers shown against the respective objects on the slide.

Compound animations for text items (i.e. paragraph-by-paragraph animations) may be grouped, in which case it will be necessary to expand the list using the chevron control.

In addition to controlling things like the direction and duration of an effect, PowerPoint allows you to introduce delays between an effect's start condition and when it plays. So, for instance, you could set an animation to play 2 seconds after you click to activate it. This allows you to build quite complicated animations. The Animation Pane isn't just a list of animations in the current slide; it's also a timeline of animation events, and shows start points and durations as plotted against a "Seconds" scale at the bottom of the pane.

Some effects allow you to do even more fine-tuning to how they behave. To modify an existing effect:

If items are not animated in the order you want, select items and then either drag to the new position in the list, or re-position using the re-order controls at the top right of the animation pane.

Once you have applied an animation effect to an item, you can add another effect to the same item (e.g. an emphasis or exit effect).

To add the second effect, don't try to choose it from the gallery — this will replace the existing effect. Instead, after selecting the item, choose Animations > Advanced Animation > Add Animation.

The animation below was constructed in PowerPoint. It uses 14 separate animation effects over two slides, with a "Morph" transition between (see below) to get the hedgehog across the road without too much messing about.

Here's a look at the first of the two slides:

The hedgehog crossing the road happens via a "Morph" transition, and its waddle out of shot happens in the next slide, using a repeated "Teeter" effect at the same time as a "Fly Out" to give the illusion of walking.

Easy animations with the "Morph" transition

PowerPoint has a special transition called Morph which creates an animation based on shared content between two slides. It allows you to generate really quite elaborate animations without the messing about normally required in the Animation Pane.

The above example is a three-slide animation created using the following method:

Morph is only available in PowerPoint 2019 or later. But many of the Morph effects are backwardly compatible, so they will work to some degree or other on earlier versions of PowerPoint.

The more elaborate your Morph, the more strain it will put on your computer. If you're going to be presenting on a lectern PC, bear in mind that it may not have as much processing power as the computer you used to make the slides in the first place.

Don't you wonder sometimes about inserting audio and video into slides? Well wonder no more!

Both PowerPoint and Google Slides support sound files including .wav and .mp3.


Inserting a sound clip to be played on demand

When the show is running, if the audio is configured for on-demand playback, the clip is activated by clicking once on the speaker icon. Hovering over the icon also generates a progress bar with a pause button.

If the sound is set to play automatically, it will play with the start of the slide. In PowerPoint, automatic playback can be delayed, and its timing controlled via the Animation Pane.

PowerPoint lets you record a commentary over slides to create a slideshow presentation that can be run unattended.

The timing of each slide is set when the narration is recorded, but you don't need to record the whole presentation in one go.

Both PowerPoint and Google Slides let you embed common video formats such as .mp4 and .mov. You can also embed videos from YouTube (and some other online sources in the case of PowerPoint).

Bear in mind that adding the video file to your slide deck will almost certainly make the file-size of your deck much much bigger. If you need to share your slides with anyone, a large file size may pose difficulties.

When viewed the player will include some basic controls, but these can be hidden from the Slide Show tab.

An embedded YouTube video will still need internet access in order to run. Video playback in a slide can be a bit buggy, and not as smooth as playback directly from YouTube, so first ask yourself whether it's essential that the video is embedded in your slide deck, or whether you could just link to it instead.

The video can be sized and repositioned, but the available settings on the Playback tab are limited to the basic "Start" animation options.

You can use this method to import videos from other sources as well as YouTube. Not everything will work.

PowerPoint lets you record your screen. The recording is inserted into your slide as an object. You can save this object as a video file, making PowerPoint quite a useful screencapture tool in its own right.

The screencapture's frame-rate is 10 frames per second.

Both PowerPoint and Google Slides have the option of live captioning when presenting:

On the hover toolbar when presenting, choose Captions

Adding subtitles to a video clip

Captions can be added so long as they're in the WebVTT (.vtt) subtitle format. Select the video and go to Playback > Caption Options > Insert Captions

WebVTT uses a text file saved with the extension ".vtt". You can make your own with any text editor so long as you save the file with the .vtt extension. The formatting looks like this:

... where the numbers are time codes in hours:minutes:seconds:thousandths.

Google Slides doesn't have any specific options for captioning imported video, but it uses Google/YouTube's video player, so if captions exist with the source video they can be displayed in the slides. Captions can be added to Google Drive videos so it's relatively easy to caption your own videos through that method.