Spreadsheets were developed as a tool to store, analyse and manipulate numerical data. They are now commonly used for working with sets of data containing both text and numbers, and for generating graphs and charts. They're also brilliant. Let's play with
[Open all concertina sections]

Here we take a look at some of the things that appear in the dropdown prompt when you start typing into a formula, starting with an exploration of named ranges before getting properly stuck in with functions: in particular, conditional functions, but we take a peek at some helpful date and time functions, and some other useful functions too.

Most formulae need to reference cells or ranges. An alternative to the usual reference style (e.g. A1) is to assign names which are used in place of the cell or range address.

For example, we might give cell A1 the name 'Cost' and cell B1 the name 'Quantity'. Then, rather than writing =A1*B1 we could enter =Cost*Quantity.

The potential benefits of this approach are:

You can name: a single cell, a whole column or row, or a rectangular range of cells.

To avoid any ambiguity in formulae, there are some naming rules:

If you are working with listed values and the number of rows in use may change, select entire columns rather than just the rows currently in use. 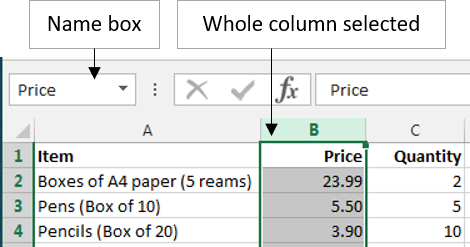 You can also create named ranges from Formulas > Defined Names 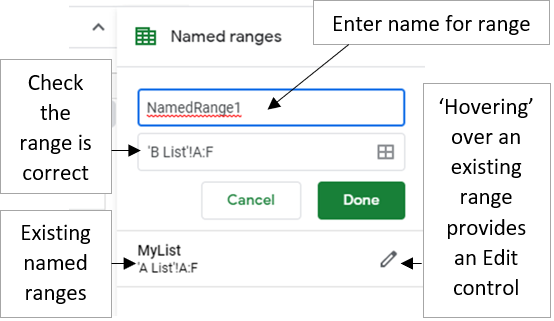 You can also create named ranges from the Named ranges side-panel at Data > Named ranges (or by right-clicking the selection and choosing Define the named range...). Enter a name for your range, check the range is correct, and choose Done.

Once created, the names can be used anywhere in a formula or function where a cell reference or range would normally be used.

Here's an example using named columns and a named cell:


The following named ranges have been created (click on them to highlight them on the spreadsheet):

Let's start with a simple calculation:

In cell E4 we need to calculate the value added tax (VAT) payable for two boxes of A4 paper. Using cell references our formula would be:

Be aware that names for named ranges are case sensitive: we could have a separate cell called VATrate, and another called vatRate, etc... although that way confusion lies!

We can go even further than this, though. Because we've named column D Cost, we can use that in our formula too. The spreadsheet is clever enough to work out, from the context of the cell, that any reference to Cost in cell E4 needs to refer to the corresponding item in the range Cost: namely the item from row 4. The latest versions of Excel require an extra nudge to tell it to do this, in the form of an 'at' sign (@) before the range name, because the latest versions of Excel can do special things with named ranges that are whole columns (if you get a #SPILL! error in Excel, it's probably because you're missing an "@"; if you're using "@"s but get a "That function isn't valid" error, it's because you're on a pre-@ version of Excel so don't need the "@"s).

The formulae required, then, are:

Use the buttons below to display the underlying calculations required for Excel and Google Sheets:


Entering names in a formula

When writing a formula, simply type in the name where you would normally enter the cell or range reference. When you start typing the name, any matching named ranges will appear among the list of functions — you can double-click on a named range in this list to add it to your formula without having to type the whole thing.

In Excel you can also enter a named range by:

In Google Sheets, clicking on a cell will always give its reference rather than its name. Even clicking on the ranges in the "Named ranges" side-menu will use the underlying reference in the formula.

To list all named cells/ranges in the current spreadsheet and to edit/delete them: 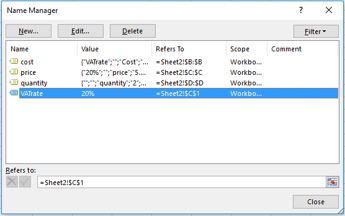 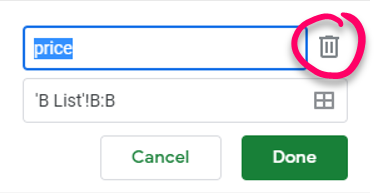 So far, when we've been entering functions, we've been doing so via the "Σ" menu of common functions. But, now it's time for us to explore some more advanced functions.

There's an extensive library of functions, arranged by type, at:

Functions are also listed as you type into a formula. Hovering over a function name will give you a short tooltip summary of what it does.

There's also these summaries of all the available functions in each program (with links to help on how to use them):

Excel has an additional way to enter functions: the Insert Function dialogue. It's another way to see all the functions by category, to search the functions list, and to get further help. 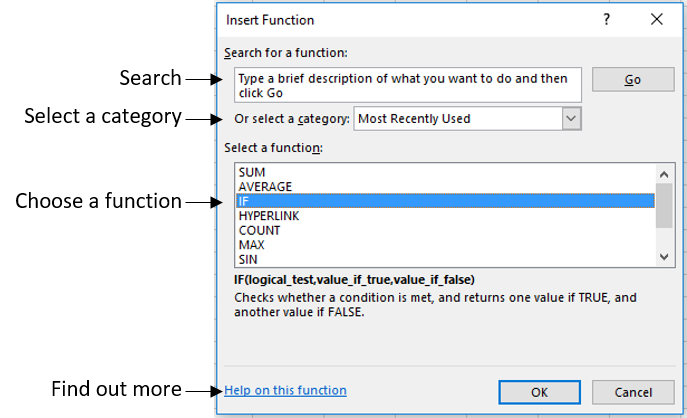 To use the "Insert Function" dialogue:

The Function Arguments dialogue can be useful when you're using a function for the first time. Each bit of information required by a function (its 'arguments') is plotted out in a series of boxes, with contextual help and a summary of how each step evaluates.

The arguments help pop-up appears in Google Sheets when you open the brackets of a function to start adding its 'arguments': 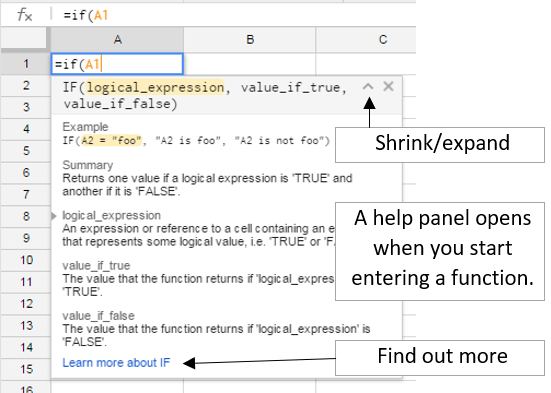 The amount of help shown can be expanded and contracted according to need, using the shrink/expand chevron toggle. Sometimes the panel can get in the way, in which case you can close it with the cross icon. If closed, the panel can be reactivated by clicking the question mark icon (?) to the left of the cell / formula bar (or by pressing F1).

Conditional functions check whether a value (usually a value in a cell) meets a logical test where the outcome can be either true or false. They then generate a result based on that true/false outcome.

Imagine I toss a coin. The result can be heads or tails. I could apply the test "The coin is showing heads: true or false?". If my toss gives heads then it meets that test: it's true; if my toss gives tails then it fails the test: it's false.

We can do a similar sort of thing in spreadsheets. Take this example:


Here are some possible logical expressions about this data that can be either true or false:

As well as referencing cells you can also directly enter values (numbers or “text”) into the arguments of a conditional function, but as always, it is better practice to reference a cell containing the value — otherwise you have to edit the function to change the tested value.

The IF function allows you to compare values and give a different response depending on the outcome. It needs three parameters (or 'arguments'):

The 'Result' portions of the above can be:

Let's look at an example:


To indicate whether each student had passed, cells in column E contain an IF function to test if the mark (in column D) has reached the pass mark (cell B1, which we've given the name passMark). There are a few options we could go with in cell E4. Here's one


This example uses text as its output, but we could equally incorporate calculations, for instance applying a discount. Here's an example taking that approach:

Suppose there are 3 possible outcomes to an exam:


Since one IF function only has two outcomes, it cannot give all three possibilities. However, combining two IF functions, one inside another, lets you test for all three results.


The first test can be done with the following formula:

This will identify marks that are a fail, but if the result is false, we now need to test between a pass and a distinction. To do this we insert a second IF:

Note that the second IF is not preceded by an equals sign (=) — that's only needed at the very start of your formula.

While this approach of nesting multiple IF functions could be extended further, it gets messy and unwieldy after a few possible outcomes. Using range lookups is simpler in these cases. We'll take a look at those later...

Nesting can be applied with any functions and is a very powerful technique; however the formulae involved can easily become confusing. Always test your formula carefully to make sure you get the expected results.

Getting conditional with the basic functions (SUM, COUNT, etc.)

All of the basic functions we looked at earlier (the ones on the Σ "Functions" menu) have variants that incorporate conditional tests. With these, cell values can be summed, averaged, counted, etc., only if they meet certain defined criteria.

The conditions don't have to apply merely to the cells being summed, averaged, counted, etc. — the tests can be applied to associated data in a table, e.g. data on the same row (or on the same column if working horizontally rather than vertically).

There are also multiple-criteria versions of these functions, that let you apply tests to more than one column in a table of data. Here's a list of all the variations:


Perhaps we ought to consider some example data:

While the above example uses a standardised tabular layout, the basic versions of these functions can work with ranges of any shape or size and needn't be limited to one dimension. However, when more than one range is being used (as with the -IFS functions), all ranges used must be of the same size.

While the criteria in the above example were all 'hard-coded' into the formula, they can, as with most formulae, be provided from cell references. But there are certain foibles to be aware of, and tricks it's useful to know about:

Calculations and functions for dates and times

When performing calculations with dates and times, be aware that you'll have to format the results appropriately. The spreadsheet won't necessarily format your answer as a date/time by default.

Since dates are represented as whole numbers, adding or subtracting a whole number to a date will give a different date:

Since dates are represented as whole numbers, subtracting one date from another will give the number of days between those dates:

By default, times are treated as a time of day, so 12:00 means noon. But time can also be used as a duration, and can be used to calculate new times, even on a new day:


In many cases, there's no need for us to distinguish between time and duration. However, unexpected results may start happening if we try to total durations exceeding 24 hours!

In such cases, the cell(s) involved must be formatted as duration:

The [ ]s around the "h" are what makes the spreadsheet know it's dealing with a duration rather than a time.

Let's take a look at some specialist functions for working with dates and times:

Spreadsheets include some functions that are able to refer to the computer’s internal calendar and clock. These functions are unusual in that they require no arguments between their brackets:

Be aware that since these values change with the day and time, they can't be used as a date/timestamp.

These functions can be used in calculations, for example to find out how many days there are until a deadline is due:

Here are a few functions for building dates and times or getting components out of them:

While it's relatively easy to do maths with dates at a day level, sometimes we need to get a bit cleverer: