Ever wanted to create a soundtrack? Like the idea of mixing audio? We provide some tips, principles and examples on how to get creative with sound.

Sound is a wave-like vibration of air (or other material). We can capture that sound by capturing an impression of that vibration.

In a gramophone recording, the sound vibrated against a needle which cut a correspondingly jagged groove in a rotating disc. During playback, the groove vibrates the needle which vibrates the air. You can test this with a vinyl record and a five pound note:

This is an analogue recording: the shape of the soundwave is essentially directly captured, like for like, in the recording medium (in this case the jagged groove of the vinyl) — much like how a seismograph draws a wavy line when jostled by an earthquake.

In the above graph, the blue samples are snapshots of the sound wave. There are two dimensions to those samples: the sample rate (x-axis) and the bit depth (y-axis).

The sample rate is the number of samples being made in a given period of time. Think of it like frames of film....

Sound needs a lot more frames to be understandable, not least because sound itself is made up of tiny vibrations: human hearing can discern vibrations between 20 and 20,000 Hz as different pitches, so 24 samples per second is not going to come remotely close to replicating the nuances of those sounds. A sample rate of 8,000 Hz serves for basic telephone communication (though ess-es sound like effs), but to properly capture human hearing you need to be able to pick up two points in the vibration at the highest pitch we can hear (in other words double 20,000 Hz). That's why CD audio has a sample rate of 44,100 Hz (or 44.1 kHz).

Bit depth is the amount of information being recorded in each sample. If samples are like frames of animation, bit depth is like the size of the image being animated, or, more accurately, like the number of colours being used in that image. 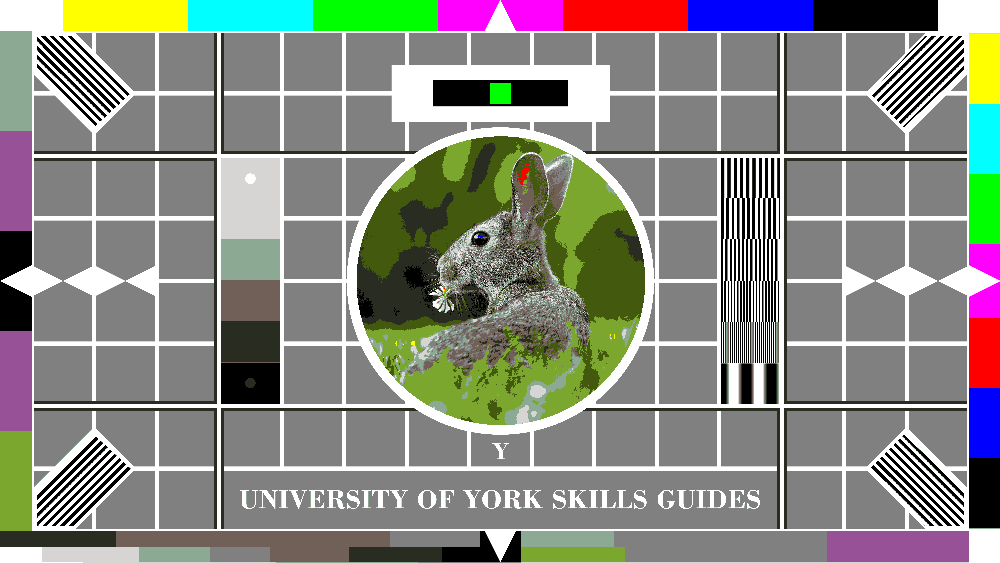 A 4-bit colour palette reduces our bunny to blocks of simple colour.

The above image uses a 4-bit colour palette: that is to say that it is made from 16 colours (15 in binary is 1111 — in other words 4 binary digits — and zero makes 16). Because there are only 16 colours to play with, the natural colour of the rabbit photo is reduced to blocks of the nearest available colour in the palette.

With audio bit depth, the 'colours' are amplitudes (amplitude is the amount of vibration occurring in the sound medium — the volume of the sound). The amplitude of a wave at a particular sample point is rounded to the nearest available value ('quantization'). Let's have that graph again from earlier to see that happening:

The greater the bit depth, the more accurate the representation of the sound (the 'resolution'). CD audio uses a bit depth of 16 which gives a resolution of 65,536 possible amplitudes. To carry on with our colour palette analogy, that's something looking more like this: 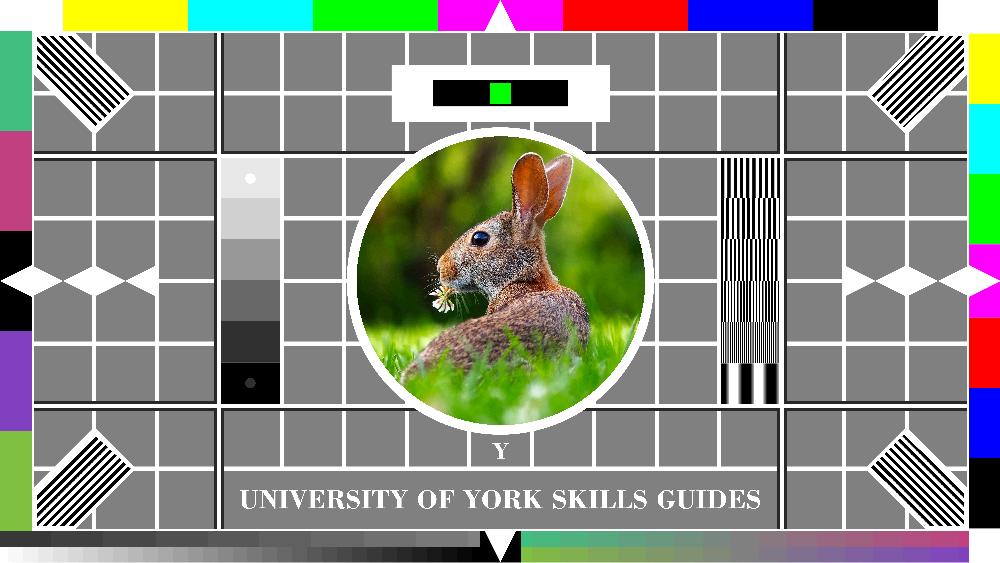 A 16-bit colour palette gives a far more natural looking rabbit but blocks of colour are still visible, especially in the gradients at the bottom of the testcard.

24-bit audio offers over 16 million values and is considered to be of a professional standard. It's a close approximation to human hearing capabilities. 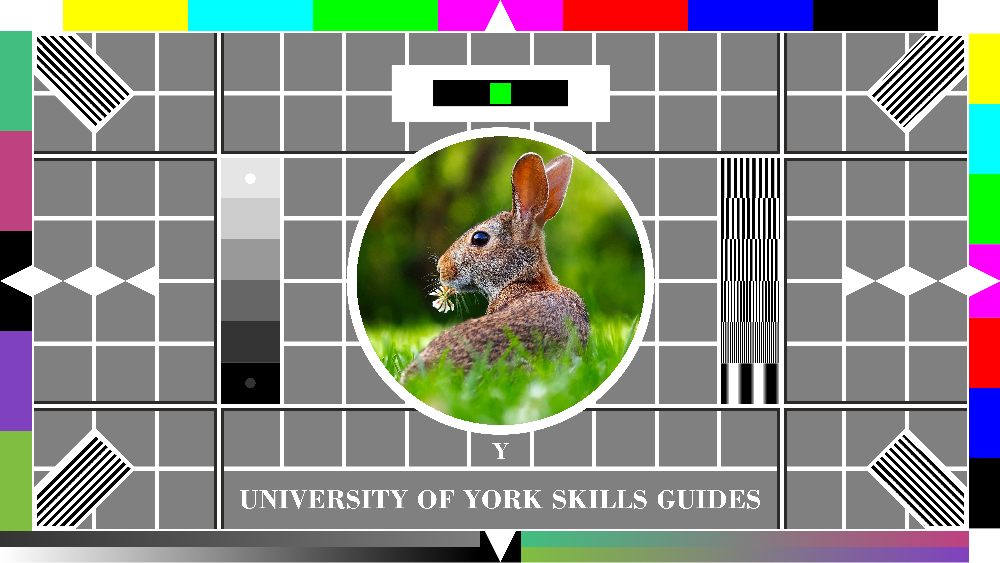 A 24-bit colour palette gives a suitably natural looking rabbit and the gradients are smooth. The same is even more true for 24-bit audio.

In addition to 16 and 24 bit formats, the free sound editing tool Audacity has a 32-bit option, albeit using a 'floating point' method which gives a greater rounding error at larger values. For most purposes, 24-bit is more than sufficient.

Always bear in mind that published sounds are always subject to copyright law, so you can’t just use any sound you want.

Fortunately, there are plenty of free-to-use sounds out there. You can find some here:

For more information and advice, take a look at:

Audacity is a free audio-editing tool. It can be downloaded for use on your own computer but it's also available on campus machines.

Adobe Audition is a more advanced audio-editing tool. It's available as part of the Adobe Creative Cloud suite.

There's also a range of free online tools for sound creation and editing. Here's a selection of interesting tools and resources for use at your own risk:

There are a number of audio file formats. The most common are:

Waveform audio file format (.wav) is the standard filetype for digital audio. It is used for professional and archival purposes. Wave files are generally an uncompressed representation of the string of samples that make up a digital recording.

The sample points in a wave file

Because they are generally uncompressed, wave files need to record every point of data in the file. Consequently, file sizes can be very large. A CD-quality 16-bit 44.1 kHz stereo recording takes up about 10 MB of file-space per minute:

MPEG-1 (or MPEG-2...) Audio Layer III (not that anyone calls it that) is the most common audio file format. It uses 'lossy' compression a bit like the compression used to make a JPEG image file. As with JPEG, there's the ability to select the 'quality' of the file, in this case in the form of the bitrate (the number of kilobits of data being used each second): the lower the bitrate, the smaller the size, but the more compression artifacts (in other words, the worse the sound quality).

The free sound editing tool Audacity supports a range of bitrates up to 320 kbps, but even this will lose some information from the original recording. The video below demonstrates this by isolating the lost information from a 320 kbps encoding of "Tom's Diner" by Suzanne Vega:

Audacity has a range of mp3 encoding options including a number of preset settings.